In this article, we’re taking a comprehensive look at one of the most misunderstood creatures on the planet – bees! While bees are most notorious for their sting, it is also important to understand the crucial role they play in our ecosystem. We’re taking a look at the most common types of bees to help you understand these wonderful insects.

Let’s get one thing out of the way first, there are a lot of types of bees. We couldn’t possibly outline every bee in the world in this article. In fact there are over 20,000 species of bee in the world, and over 4,000 of these species are native to USA. Needless to say, that’s a lot of bees.

That’s why we’re turning our focus in this article to the most common types of bees that you might see buzzing around your backyard. It’s our hope that with an increased understanding of these creatures, that you might come to understand why it’s best to just let them “bee”. Really sorry about that.

Let’s start with perhaps the most famous of all bees – the honeybee. For each bee, we’ll examine their habit, their appearance, and their general behavior.

This is a good place to get an understanding of just how many species of bee exist. Just within honey bees, there are 8 different species recognized, with 43 different subspecies. Once again, that’s a lot of bees.

Originally, all honey bees were native to Eurasia until they were spread around the world by humans. Now, there are honeybees in all parts of the world. In North America, most honeybees actually live in artificial colonies run by beekeepers. Honey bees fly as far as 3 miles from these colonies.

The honey bee is perhaps best known for its trademark look. It is yellowish-brown with black stripes on the abdomen. Honey bees have much of the trademark bee behavior, including building “beeswax” nests, production of honey, and their ability to sting you!

But do note that bees by and large are not out to sting you. For the most part, they couldn’t care less about humans, and will only sting when they or their hive are immediately threatened. In fact, a honey bee will die in the stinging process, so it’s not exactly their go-to choice.

Honeybees are also known for an activity that is vital to our ecosystem, and one of the most important functions that bees provide to the world – pollination. Pollination is the act whereby a bee transfers pollen from a male to a female flower, which allows the plant to create offspring.

The pollination is not an intentional act by the bee. In fact, they are collecting pollen as food for their colony. The bees collect pollen to store in “baskets” on their body. The pollen that doesn’t reach these baskets might complete the pollination process for a plant.

A bumble is one of 250+ species of bees within the genus Bombus, with 49 native species to the USA. Bumblebees are found mostly in high altitude regions of the Northern hemisphere, although there are also bumble bees found in South America. They have also been artificially introduced to other areas around the world.

Bumblebees live in nests built in the ground.

Bumblebees are known for their distinct “fuzzy” appearance (it’s actually a soft hair called pile). They generally have alternating stripes of yellow/black hair. These are likely the bee that is most often depicted when we think of bees.

Their trademark “bumble” sound is actually for good reason. They move around quickly, and the vibrations cause the pollen to fall off a flower, sticking to their hair. As a result, bumblebees are great pollinators, and they pollinate a wide range of flowers and crops.

Bumblebees are typically not very aggressive as well, although they can sting you if they are particularly threatened.

Mason bee refers to bees within the genus Osmia, a part of the greater family Megachilidae. Mason bees are found in many areas throughout the world, including the Americas, Europe, and Asia. Most are found in temperate areas of the Northern Hemisphere, although some have been artificially introduced elsewhere.

Mason bees derive their name due to their tendency of making nests with “masonry” products, such as mud. They use this mud to fill close nest cavities, and they build these nests in naturally occurring cracks and holes in stone, wood, and other dark areas.

Mason bees are smaller than typical bees, and they also tend to have a distinct “metallic” looking finish. Their small size also gives the appearance that they are zipping around wherever they go.

Mason bees are also efficient pollinators. They visit a wide variety of flowers through which they spread pollen. Unlike some other bees (such as honeybees), mason bees do not have “pockets” by which they carry pollen. Instead, the pollen sticks to the hair on the underside of their bodies.

Mason bees are especially non-aggressive. It is almost a guarantee that you will never be stung by a mason bee. The male bees cannot sting, and female bees are almost never aggressive toward humans.

Carpenter bees belong to the bee species Xylocopa, in which there are 500+ bees within 31 subgenera. In fact, carpenter bees are the largest native bee to the USA.

The name “carpenter bee” refers to their habitat and nesting behavior. Carpenter bees burrow into hard wood and bamboo to set up their reproductive nests. They leave an impressively clean hole, with lots of surrounding saw dust.

Carpenter bees have an appearance similar to the classic honey bee. They are covered in soft yellow hairs, and typically have alternating yellow/black stripes on the abdomen. It is also important to note that, because there are so many different subspecies of carpenter bee, there are differences in appearance between the different types.

Carpenter bees are quite efficient pollinators of many plants. They have pollen baskets on their legs, with which they store the pollen and carry it (effectively transferring a great deal of pollen from flower to flower). However, on certain smaller plants, they will simply “burrow” inside the plant and take the nectar. In these instances, they are not pollinating the plants.

Carpenter bees are known to be quite territorial, but they will still only sting you if threatened. Many have had bad experiences with carpenter bees from stepping on dead wood in the forest where carpenter bees have made their nest. In these cases, they feel threatened and sting. Only females are capable of stinging.

Leafcutter bees are a member of the genus Megachile. There are over 1500 species and over 50 subgenera of leafcutter bees.

Leafcutter bees are given their name because they will chew or “cut” pieces of leaves or pedals, and use them to build their nests. They nest in a similar fashion to mason bees above, in that they choose dark areas to live (such as hollow twigs and natural cracks and cavities), and fill in the gaps with these petals and leaves. The main difference being that mason bees use mud, and leafcutter bees use pedals and leaves. Leafcutter bees have also been known to nest in abandoned “burrows” in the ground.

Leafcutter bees vary in their appearance, as there are over 1500 species of leafcutter bee. However, they typically have alternating stripes of black and white or black and yellow/brown. They have soft hairs that typically cover their thorax as well as the bottom of their body.

Leafcutter bees are efficient pollinators. Like mason bees, they actually carry the pollen on the underside hair of their body, as opposed to within “pockets”. They pollinate a vast array of wildflowers, and even many fruits and vegetables.

Because leafcutter bees are such efficient pollinators, they have been artificially introduced to many areas of the world to assist with crop pollination.

These bees can sting, but it is rare, as they are typically non-aggressive. Additionally, their stings contain less “bite”, and are generally much less painful than the traditional honey bee sting.

And Many, Many More

The above list covered many of the bees you can expect to see in the USA, but do note that this is very much a non-exhaustive list of bees. As mentioned above, there are over 20,000 species of bee across the world! Even within each category of bee that we examined, there were many different species.

People can, and have, dedicated their life to studying these fascinating and highly beneficial creatures. We hope our list has given you a good introduction and understanding of all the bees that might be located in your very own backyard! 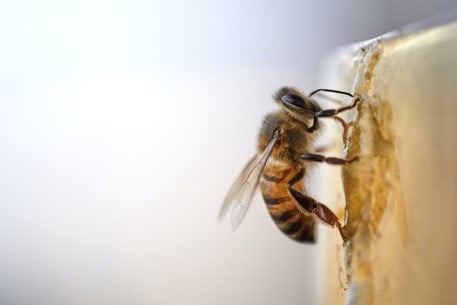 A Note on Bee Removal

A lot of the time, people search bee resources as a means of “pest control”. But hopefully by this point you can see that bees are very far from “pests”! In most cases, bees will completely keep to themselves, and do not necessitates removal.

Of course, this might be another story if bees have made their nest in your home, or an area of your backyard that your children might frequent. If you think you need bee removal, be sure to evaluate the decision very carefully. In fact, it’s probably the right idea to get the opinion of a professional beekeeper before doing so. Many will offer their services to help you identify and manage your bees!

If you think you have a bee issue that needs addressing, be sure to consult a professional before doing so. Many species of bee are critically endangered, and that is primarily due to habitat destruction. And seeing as how they play such a vital role in pollination and plant reproduction; we need all the bees we can get!

Thanks so much for checking out our comprehensive beginner’s guide to the different types of bees! We hope we have given you a good base knowledge to spark your understanding of all the different bees in the wild. They are truly fascinating creatures, who do a whole lot of good for the environment. It’s a shame that their stinger has given them such a bad reputation!

So the next time you see a bee buzzing around your garden, understand that they’re just there to help! 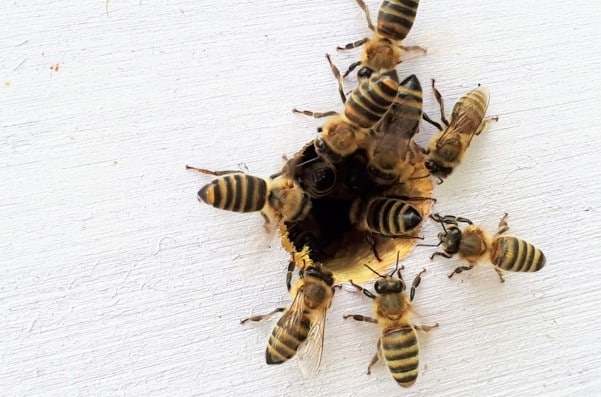 Before we wrap up, let’s check out a few of the most commonly asked questions about bees.

Do All Bees Sting?

No! First of all, no male bees can sting, because the stinger is related to the female’s ability to lay eggs. There are also some species of bee who do not have a “stinger” capable of stinging humans. A bee sting is made famous because some of the most “popular” types of bee are capable of stinging (the honeybee and the bumblebee).

Do All Bees Make Honey?

Nope, in fact, only one kind of bee makes honey. You can probably guess which one – it’s the honeybee. Honey is made from pollen and nectar which is collected by the worker bees, and then produced within the wax bees’ nests. The bees use the honey as food, and it’s a big part of what allows them to get through the winter.