Have you recently adopted a vegan diet? Or have you always been a vegan, and you are looking for some good tasting, healthy non-dairy cheese to incorporate into your diet? Or maybe, you are lactose-intolerant, and you want a practical way to manage your cheese craving.

There are various types and brands of vegan cheese available in the market that taste just as good as dairy cheese and have the same creamy, soft texture.

In this article, we review some of the best brands of vegan cheese on Amazon. We also explore vegan cheese, its sources, and how to choose the right one.

Below is a review of some of the best vegan cheese on the market. While some products are 100% organic, others incorporate a few chemical ingredients. 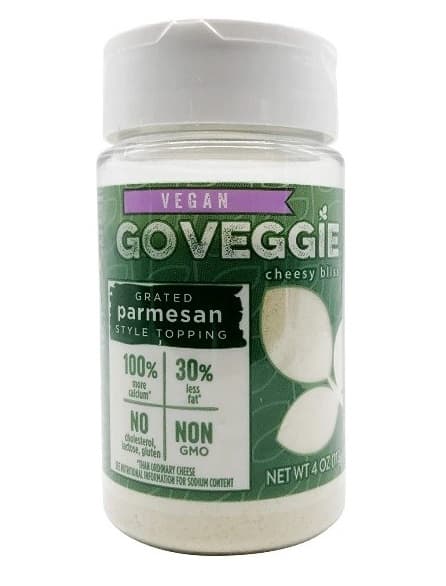 The Go Veggie Dairy-Free Grated Parmesan Cheese is a non-dairy grated parmesan style cheese. It is made with soy protein concentrate as the base and is not suitable for people allergic to soy. It is non-GMO, gluten-free, cholesterol-free, sugar-free, and cholesterol-free. It is a great option for people who are lactose-intolerant, gluten-intolerant, vegans, and vegetarians.

It has up to 30% less fat than ordinary cheese but with double the level of calcium. It can be used in a wide range of recipes, including a topping on pizzas, salads, soups, pasta, and popcorn. The manufacturer recommends against freezing it. However, it should be refrigerated after opening

The Daiya Cheese sauce variety pack comes with three packs of three types of cheese, including cheddar, Alfredo, and Zesty cheddar. All the vegan cheese packs are dairy-free, non-GMO, gluten-free, and soy-free.

The sauces have a rich cheesy flavor and texture. They are ideal for people who are allergic to lactose, soy, and gluten. While the sauces are rich in calcium, they are high in saturated fats and low in protein.

They can be used together or separately on various recipes, including pasta, veggies, soups, noodles, baked potatoes, nachos, dips, etc. or it can be warmed or served as is. 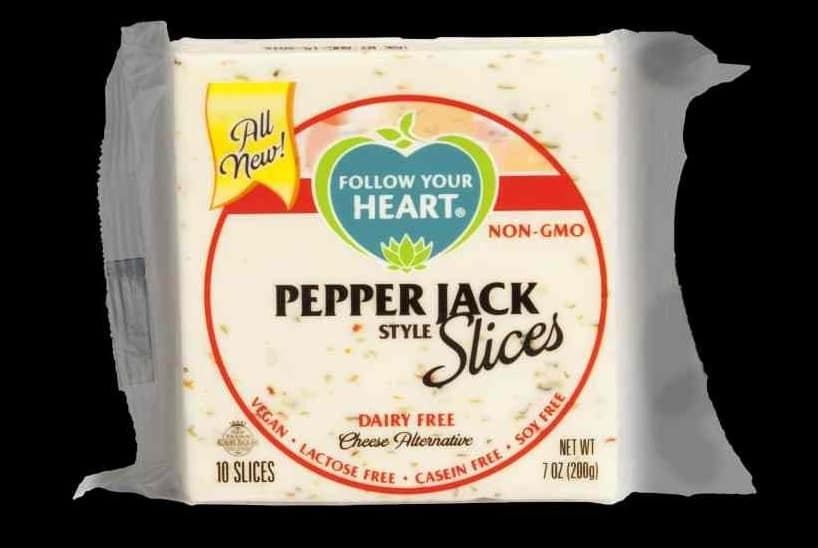 The Follow Your Heart Pepper Jack Style slices are a non-dairy cheese alternative. The ingredients include various forms of soy, including soybean oil, soymilk powder, and soy protein concentrate, and may not be ideal for people who are allergic to soy.

They are highly perishable and should be frozen if not being used immediately and refrigerated once opened. These cheese slices melt easily and can be blended with green jalapenos and sweet red peppers to create zesty and creamy sauces. If melted into a sauce, they can be used in soups and pasta dishes. Otherwise, you can use the slices in sandwiches and burgers. 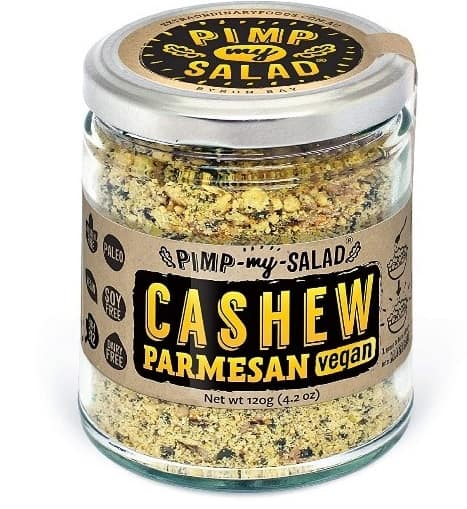 The Pimp My Salad vegan cashew parmesan cheese is dairy-free, soy-free, and gluten-free. It is best used as a salad topper or can be consumed on its own as a snack. It has a rich nutty taste and texture due to the use of cashew nuts as the main ingredient.

It is also rich in fats and can be used in keto recipes. It can also be used as an ingredient in burgers, sandwiches, pizzas, and even mac and cheese. 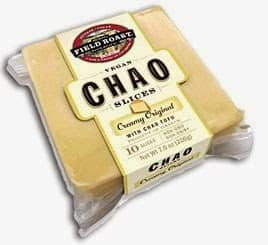 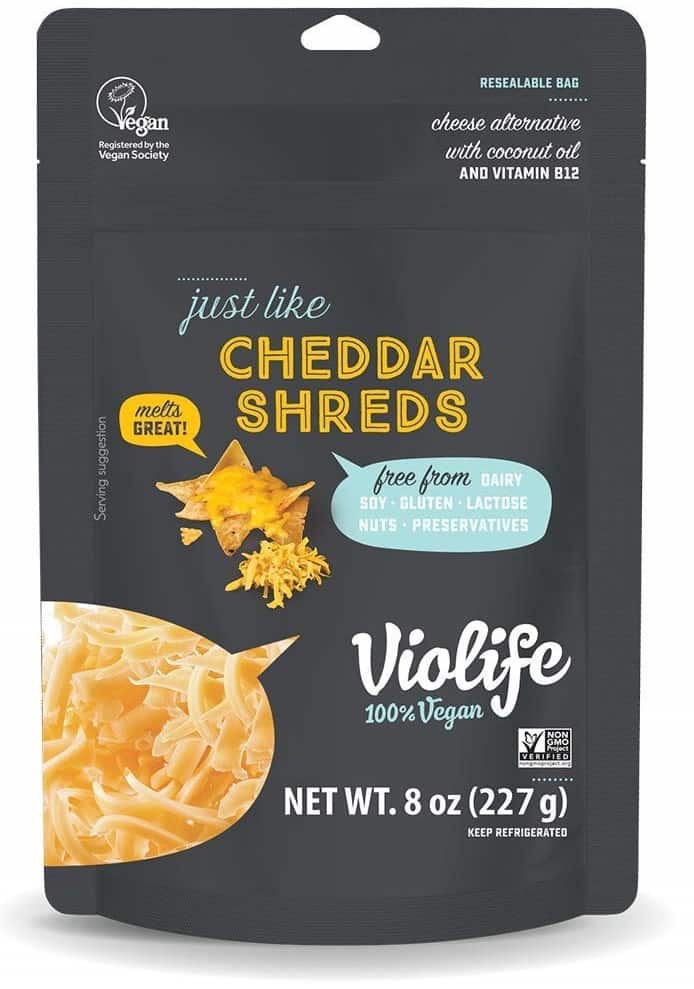 The Violife cheddar cheese shreds are 100%vegan and plant-based. They are tasty and melt easily. They are gluten-free, lactose-free, and soy-free. They are also free from any animal products or preservatives. They are made with coconut oil and corn starch as the base. They are fortified with vitamin B12. These shreds can be used on a wide range of recipes, including quesadillas and nachos. 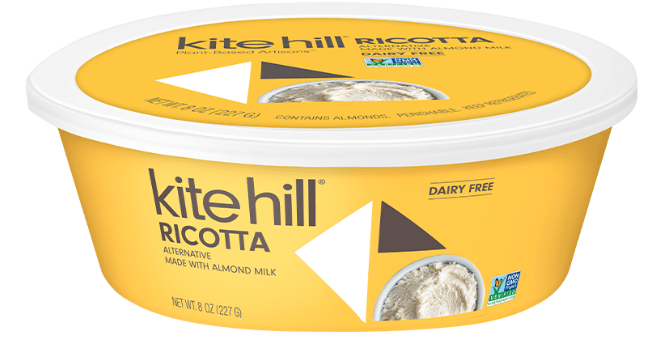 The Kite Hill Ricotta cheese is made minimally with only five ingredients. Its main ingredient is almond milk that gives it a rich, creamy taste. It is a great alternative for ricotta cheese and tastes like ricotta cheese only with a creamy almond taste.

It is versatile and can be used in a wide range of recipes, including lasagna and desserts. It does not contain soy, gluten, dairy, preservatives, or GMOs. 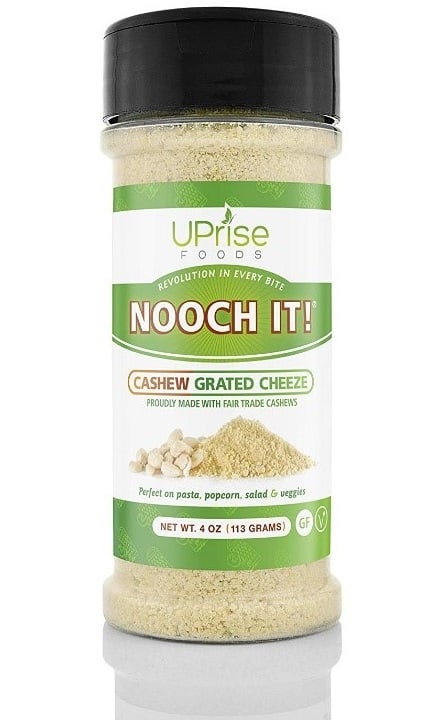 The NOOCH IT gluten-free grated cheese is a vegan parmesan cheese. It is made from organic, fair trade cashews. It tastes good on a wide range of recipes, including steamed or roasted veggies, veggie salads, pasta, pizza, soup, and popcorn.  It does not contain soy, and all its ingredients are non-GMO.

This section covers critical information that you need to know to make the right vegan cheese buying-decision. It answers some of the top vegan cheese FAQs, common ingredients in vegan cheese, and most common vegan cheese types.

What is Vegan Cheese?

Vegan cheese is a dairy-free alternative for cheese. There has been a debate between vegans and dairy cheese lovers on whether vegan cheese is really cheese. Well, the verdict is not yet out. In fact, some people refer to vegan cheese as veganeese.

What Is Vegan Cheese Made Of?

Vegan cheese can be derived from a wide range of plants, including:

Like dairy cheese, vegan cheese comes in all forms, shapes, colors, and sizes. Below are some common styles of vegan cheese.

Is vegan cheese healthy? First of all, the concern for most vegans is how to hit their daily recommended protein intake. While dairy-free cheese does not have casein, which is the main protein component in dairy, most vegan cheese brands understand this concern and are keen to formulate vegan cheese products rich in proteins.

For instance, vegan cheese made from almonds, cashew nuts, or soy tends to have significant amounts of protein.

Secondly, high levels of saturated fats are a concern for most people who consume cheese. Therefore, the big question is whether vegan cheese has a lower saturated fat content.

The third concern is in regard to getting enough nutrients, especially calcium. Vegan cheese made with almonds tends to have a good amount of calcium. Besides, some manufacturers fortify their vegan cheese with calcium and Vitamin B12. For instance, the Go Veggie Dairy-Free Grated Parmesan Cheese is fortified with B12, while The Violife cheddar cheese shreds are fortified with B12.

Many vegan cheese manufactures are keen to manufacture healthy plant-based cheese that has a good distribution of macro-nutrients. There is a variety of SMO-free, gluten-free, preservatives-free, and additives-free vegan cheese in the market. However, they may be pricier than their non-organic counterparts.

It is crucial that you carefully look at the ingredient list of the vegan cheese in your consideration to investigate if it has enough protein-rich and calcium rich-ingredients. Pay keen attention to sodium and saturated fat percentage amounts and avoid products with a high percentage.

Also, avoid vegan cheese with many chemical ingredients. Note that most vegan cheese contains soy, which is a common allergen.

There are a number of vegan cheeses on the market that produce high-quality plant-based cheese. These brands are available in most local grocery stores across the US or can be bought on Amazon. They include:

Whether you are vegan, lactose-intolerant, or simply prefer vegan cheese, there are numerous products to choose from. Since different vegan cheese products are made from a wide range of ingredients, there is no standard vegan cheese taste or nutritional composition.

Try out the different options in the market to find out what you like. Also, a given product’s reviews will help you determine what to expect.